Persistence does not equal failure 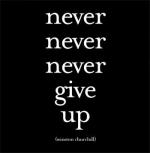 Sometimes students think that if they need to persist at a task in class then they must not be smart enough. They learn not to value persistence because they see it as a sign that they are not smart enough to “get it” the first time.

Of course that’s a generalization, but there’s more than a little truth to it as well.

This series of blog entries is about the Teachers Handbook that we all carry in our head. Those unspoken and unquestioned default ways of working that we call on every day, that might actually be robbing kids of the opportunity to develop their Habits of Mind. It might be one of these default ways of working that leads children to believe that persisting is a sign of being not smart enough.

Consider this scenario. You’ve set the students in your class 10 questions to answer by the end of the class. With 5 minutes left in the class what would you normally do? Is it likely that you’d ask who’s got all 10 questions finished? Is it also likely that you’d set any unfinished questions as extra work at home or after class? Sound pretty familiar? What’s the message students get from this?

The message is that getting finished is what’s important. That if you couldn’t get through the work and needed to persist then you mustn’t be smart enough. Students that finish quickly and easily are the ones that get  recognised and rewarded.

Consider this strategy as an alternative to asking who’s finished their work. Ask instead “who’s got stuck at least twice today, and can tell me what they did to get unstuck?”. The recognition goes to the students who were engaging in a process, that were learning how to learn. Further, the discussion that follows is one that is based on the learning process.

Some of the students who got to the last question may not have needed to persist – that would be a sign that the work was too easy for them. Should they be rewarded for that?

Another student was focused, tried 5 different ways to work through a problem until finally they solved it, but because they had work through it only got up to question 6. Shouldn’t they be recognised and rewarded for their efforts? Ultimately aren’t the students that are become more effective at over coming difficulties likely to become the most successful? Wouldn’t you want other students to behave in a similar way?

In our default Teachers Handbook we reward work being completed – which it needs to be – but we sometimes do this at the expense of rewarding students for the way they complete work. In a classroom where everyone is working in their Goldilocks Zone every student should be regularly getting stuck. The measure of success is how they approach that situation.

Although we might encourage students to “be persistent” our actions often speak louder than words. If we don’t actively recognise, encourage, expect and reward students who are developing this Habit of MInd, then they in turn will devalue the Habit.