Understanding intellectually that The Greatness Gap can be bridged by hard work and deliberate practice doesn’t always close the emotional gap!. There is still a lingering feeling that successful people might be different in other ways. And the most common difference raised is that successful people are more motivated than the rest of us.

To call on motivation, or drive, as the difference between highly successful people and the rest of us, is to recreate the greatness gap. Most people believe that successful people are the way they are because of differences in innate ability, gifts or intelligence. When this belief is challenged many people point to motivation as an unchangeable, inborn difference between elite performers and the rest of us – a reason they can’t be more successful.

It is true that elite performers are highly driven. They are internally motivated to stick to their goal and put in the kind of effort and deliberate practice that is required to perform at elite levels. However, it’s not true to say that they were born with some innate drive to succeed either in a general sense, or within their specific discipline.

It doesn’t appear that people come pre-motivated to perform. The motivation to perform is initially external. Sometimes this is driven by a parent or significant adult. Sometimes by a significant event that inspires, sometimes it comes out of spite or love and sometimes, initially, the motivator is money. But always the initial stimulus is external. No one, at least as far as we know, is preprogrammed wanting to either achieve in a general sense, or in a specific field. 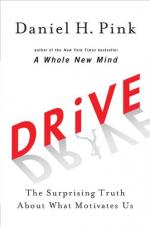 What seems to happen is that over time, perhaps through experiencing success as a result of an external motivator forcing them to engage in deliberate practice, individuals become internally motivated. Further this internal drive seems to come from three factors – Autonomy, Mastery and Purpose.

There is much more to this story, but it really belongs in another forum, not here in a blog about Habits of Mind. I’ve included it here as it relates to the Greatness Gap. And the Greatness Gap needs to be closed if we are to believe that people are capable achieving excellence and accept that the Habits of Mind have an important role to play in developing our capacity to grow.

I’ve included a very cool summary of Daniel Pinks work on Drive below for your interest and strongly encourage you to have a look at his book.

A facinating summary of Daniels Pink’s work on Drive