Why achieving excellence is so elusive -pt 1

Over the past 30 years or more we’ve learnt a lot about successful people. Psychologist like Anders Ericcson and Carol Dweck have made a career out of studying high achievers and identifying their common characteristics. Authors like Malcolm Gladwell (Outliers), Daniel Coyle (The Talent Code) and Matthew Syed (Bounce) among others have popularized the notion of learnable intelligence.

A plethora of popular books like Steven Covey’s 7 Habits of Highly Effective People have been published all claiming to describe the path successful people have traveled to achieve their success. All suggest that if we just do what they did, we can all become just as successful.

Why then do we have millions of books sold, but not an equivelant number of highly successful people? Why can’t people simply follow in the footsteps of high achievers, adopt the hard won lessons learnt from these people, and become just as successful?

The short answer is that we haven’t been told the full story – yet.

Fundamentally all the research mentioned above (and described in this Success Series) comes from case studies of successful people. It all asked the the same basic question – what did successful people do in order to become successful?

Carol Dweck identified that successful people tend to have a growth mindset. They believe they can improve.

Anders Ericcson discovered that successful people engage in deliberate practice (for around 10 000 hours) before they achieve excellence.

There has been an aspect of the acquisition of excellence that has been largely over looked by the research and publications above. An essential ingredient that tells us not only WHAT successful people do, but also HOW they go about doing it.

Knowing the path that must be travelled in order to be successful is not enough, if you do not also have the skills to travel that path! Many people set out on 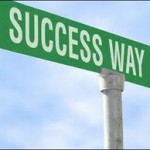 the path towards success and high achievement and fail, not because they don’t know the way, but because the way is too difficult.

How do successful people travel this path? In “Ferraris and Minis & HOM” I described them as driving skills, but put simply these people engage their well developed Habits of Mind.

The Habits of Mind have been the missing part of the puzzle of the aquisition of excellence.

In my next blog entry I tie together all the threads of this work to show why the Habits of Mind are such an essential component of our understanding of the acquisition of excellence.